Andrea Moreno, from Bumble on "Women in tech" Bumble Inc, the "parent" company of Bumble, Badoo and Fruitz, is landing with style in Spain. The company chose a private office at OneCoWork Portal de l'Àngel as their home in Barcelona and we couldn't be prouder to have this rare women-led company as part of our community.

While women have been conquering more seats in the tech industry, jobs in this market remain mostly held by men. That is why for the occasion of International Women´s Day 2022 we invited Andrea Moreno, People & Internal Operations at Bumble, to talk about the main challenges women face when starting a career in tech and how the company is acting to change this reality.

Can you tell us a little bit about yourself, your professional background and current role at Bumble?

I come from a very diverse (some would say random) background. My origins are more from the humanities area. My academic background is Philosophy and Bioethics. However, I’m the kind of person who is interested and likes almost everything. One of those specific interest has always been Tech and its environment.

I was working in a magazine when all of the startup movement started to originate in Barcelona and it was very easy to get lost in this very exciting new world and way of understanding a business. At this point I was very much in touch with any new startup, technology, conferences (4YFN, MWC) and it turned into a must for me, that at some point of my professional career, I would end up working for one of these new kinds of companies.

I managed to tick that box in summer last year when I joined Bumble. For me it’s not just any other tech company but THE Tech company I wanted to be part of, it's a 100% mission orientated company. Business and product editions are moved based on its core values. Something that I have as well as a personal philosophy.

My role at Bumble resonates a lot with my background. It’s as diverse and non-conventional as myself. In short, I’m part of the People and Culture Team, back in the day, Human Resources area. But in my day to day, I wear many different hats, in Colombia (where I am originally from) the word would be “La Todera” from the spanish word TODO = everything; which would translate to something like the person who does a bit of everything.

Bumble is known for being a rare women-led tech company. What are the main initiatives and programs you’ve been working on to build this journey for equality?

There are many initiatives that are being done in order to bridge that gap of inequality, all the way from the very top to the bottom.

Bumble has an equitable gender representation within its executive leadership team. Our Founder and CEO, Whitney Wolfe Herd, also stands out as the youngest woman leader to take a company public at age 31.

However the issue of women in tech is still a very real situation and one of the initiatives that I’m most proud of is the creation of the Bumble Tech Academy (codeop.tech/bumble-tech-academy). The idea for this initiative was how can Bumble really help to close that gap of women in Tech, more specifically in Engineering. The solution: support and economic stability.

We are supporting eight women+ to make a change into tech. They are attending a coding bootcamp for 9 months and will join soon the engineering teams as Junior Developers. What is making this initiative successful and different to others, is that by supporting we mean we have hired them from day 1 of the course with a competitive salary, which allows them to focus 100% on their training. This is their job right now. Second, the bootcamp has been specially developed to Bumble’s technology and way of working, and lastly, throughout the whole program they’ve had mentors and people inside the engineering team that are supporting them on their day to day.

This is the way to do it! And this is only possible because Bumble is committed to this cause and also thanks to our great partners in crime CODEOP, which is also a mission driven coding bootcamp. Their main objective, to help Women+ transition into tech. Together, we aim to double down on Bumble’s core value of empowering women to make the first move. Bumble and CodeOp will work to provide the comprehensive training and resources needed to encourage, support, and equip our trainees with the skills that will allow them to thrive in the industry.

There is a myth that there are no women in Tech because women are not interested in Tech.

This is actually a reason people (men) justify the gap on. With this Initiative we were able to destroy that ridiculous argument. In 24 hours we had over 1.000 Women+ applying for the Bootcamp.

Hopefully in the future and thanks to this program, for the next generations there will not be such a thing as a “Rare Women-Led” company and specially in the Tech world. 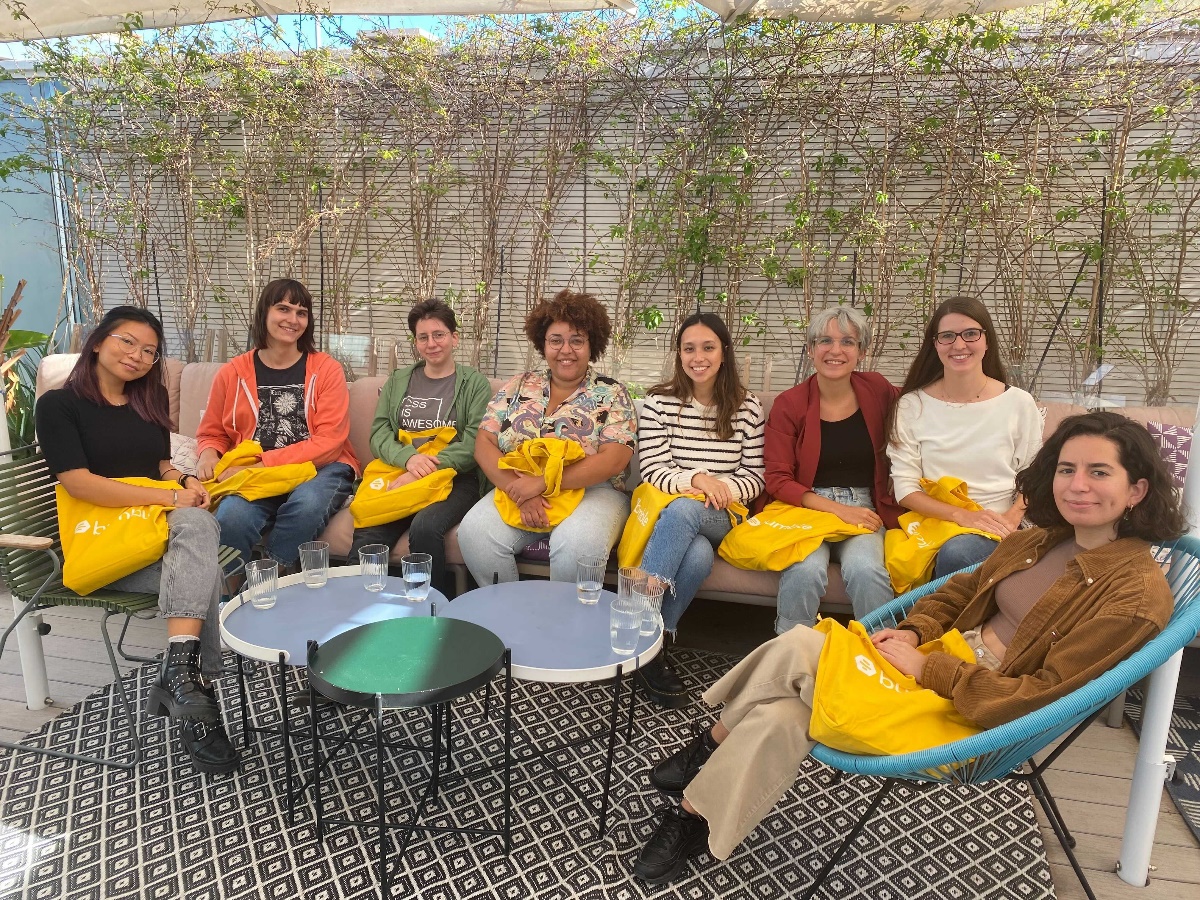 What do you think are the main challenges women face in tech industry?

Misogyny, sadly still an issue. Since it has been such a man orientated area, due to more complicated issues from early ages, some men are still not used to have women, strong women as equals. Also, there is a gender pay gap still and family conciliation issues.

These challenges are not necessarily only for tech. Some of these are easily relatable to many other areas. However the fact that it has been such a male dominated industry, makes it sometimes harder for some of these problems to be recognized and addressed.

What is your piece of advice for women who want to switch to a career in tech?

To do their research. There are lots of initiatives around to give support on that transition. If that is something that they really want, then go for it! There are role models they can follow, there are some economic help for most bootcamp schools, keep an eye on Bumble’s career area, we want to have more BTA generations to come.

Any special thoughts on how coworking spaces can contribute to help women thrive in the tech industry?

In my opinion, the main advantage of being in a Coworking is the idea of collaborative working. Not only for small companies but also freelancers. In a coworking space you have the opportunity to meet and share your business initiatives, challenges and ideas. It’s a great way to see what others are doing, learn new things, it opens new opportunities. It’s definitely a win-win, it can help companies gain new talent and also it can help individuals look for those opportunities that otherwise they wouldn’t have known there were. In the specific case of women, I believe the coworking allows these connections to happen in a safe environment, and also gives women the opportunity to meet others that are probably going through something similar. It helps them to “gang up” in the good sense.

Do you also want to be a part of our amazing community at OneCoWork? Book a tour here.